Movin' on over to tumblr

Given the simplicity and convenience of tumblr, I will now be posting the majority of my content at http://creaturesmadness.tumblr.com/


Here are some visual representations to help sum up the study: 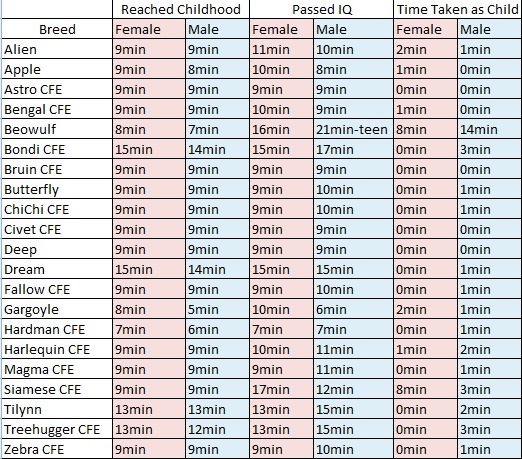 I think this is all pretty self-explanatory, but I'm more than willing to answer any questions that may arise. :)


The male testing results are finally complete. The table is sorted by the length of time (in minutes) between reaching childhood and passing the test (reaching the Meso). 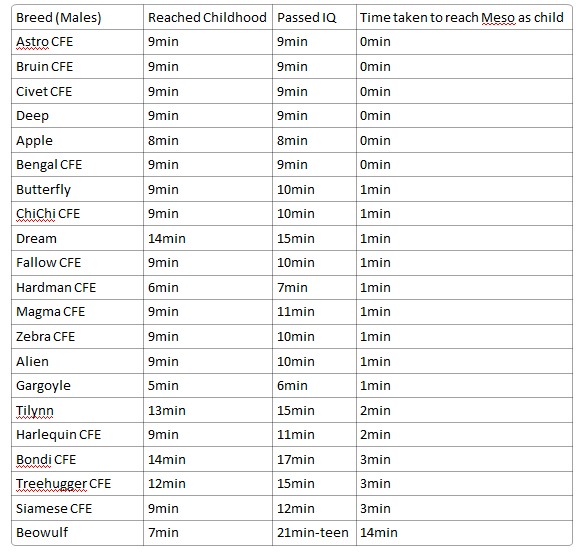 The Treehugger was irritating to watch as he was a total fool in regards to doors and lifts. He frequently complained of being crowded but remained stationary and gazing at the elevine for a few frustrating minutes as my sympathy for him started to fade. Here he is around 7 minutes old.

He was, for the most part, completely ignored by the other guys, so much of his chatter was a bit overdramatic. Mister Bondi, on the other hand, was bullied by a few others before he had the common sense to exit the workshop as he was entering childhood at 15 minutes.

Like his female counterpart, Beowulf's needs were minimal. He stomped around with a scowl and discovered that pushing Elevines resulted in extreme boredom and made him unnecessarily sleepy. 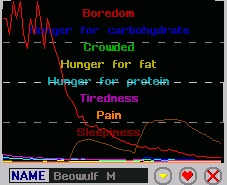 A slight hunger for carbohydrate finally begins to emerge around 15 minutes old, but he seemingly wills this need away. 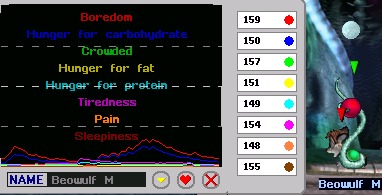 He certainly takes his sweet ol' time, but he does finally reach the Meso as an adolescent at 21 minutes, and he seems quite excited by the sight of fruit.

Next up: visualizing the data with tables and charts. Stay tuned for part 3!
Posted by Jagotka at 6:26 PM No comments:

It's been a very long time since I've played with official breeds, so I have decided to perform a little experiment.  The purpose of this study is to determine the general  IQ of a breed in comparison to other breeds. Testing essentially begins as the Norn egg is hatched at the bottom of the Workshop and concludes once the subject has entered the Norn Meso. Once the appropriate data is collected, female IQ results will be compared to the male IQ results.

No females travel to Meso before childhood, which makes sense considering most drives are not recognized as babies. The following table is sorted by the length of time taken (after childhood) to reach the Meso(food). 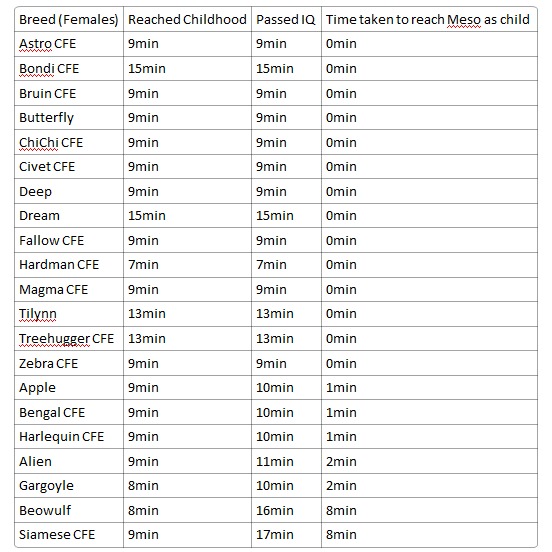 Keeping in mind that breeds are represented by a sole subject at this time, I was still a bit surprised with a few of the results.  I have studied/ played with Beowulf Norns extensively in the past and found them to be very smart and self-sufficient, so I expected the Beowulf female to perform much better than she did. To be fair, however, her needs are quite low as she reached childhood at 9 minutes: 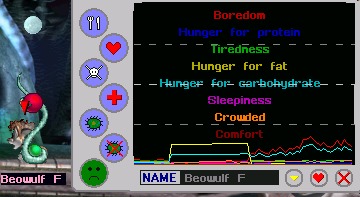 I guess she had little need to leave the workshop once she reached childhood at 8 minutes. I think she found the whole testing process pretty frustrating, but at least she didn't beat any of the other girls to death out of irritation.

I was pleasantly surprised by the Bondi and Treehugger females; I wasn't sure either of them would reach the Meso before falling victim to starvation. The Alien female , on the other hand, was much more fixated on doors than I had imagined. Luckily she managed to snap out of it before too long.

While watching  the Siamese female struggle to figure out how to work lifts and doors and express her extreme dislike for Zebra,  I didn't have much confidence that she would pass at all. 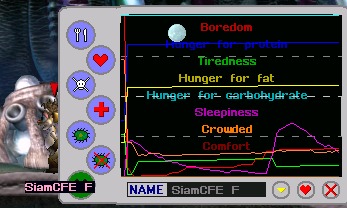 With her drives increasing along with her desire to [eat door], I had just about given up. I went to scope out the Meso and within a minute or two, in walks Miss Siamese. Although she managed to avoid starvation, she ended up developing a limp. (possibly caused by her own neglect? )

Next up: male testing. Stay tuned for Part 2!

I have been working on this project for so long that I honestly have no idea where to begin, so I'll start with this: Legacy Family Tree.

The free edition has a multitude of utilities which can be used to build an extensive database in which Norn lineage could be traced.  I've tried several methods of tracing Norn genealogy, but  combined with the free  LegacyCharting extension software, keeping track of Norn populations has never been so easy or efficient.   Fair warning: starting off is complicated. It took a lot of fiddling around before I finally figured out what the heck I was doing. Most features are only available in the paid Deluxe version, but for Creatures purposes the free version is more than sufficient.

My main family file is called Hyperborea and consists of 76 Norns at this time. I have merged several unrelated families, so there are several interwoven lineages. 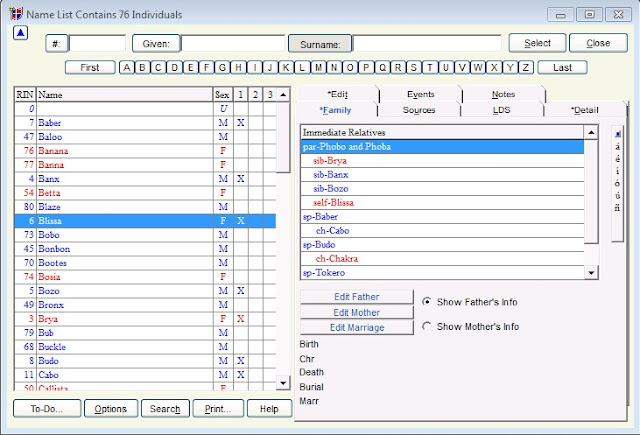 At the start of generation 7, inbreeding is nonexistent to minimal. I have been diligent (obsessive) about breeding groups and strict with IQ testing. Literally everything gets documented in Microsoft OneNote and that data is entered into Legacy. It really is a beautiful thing. 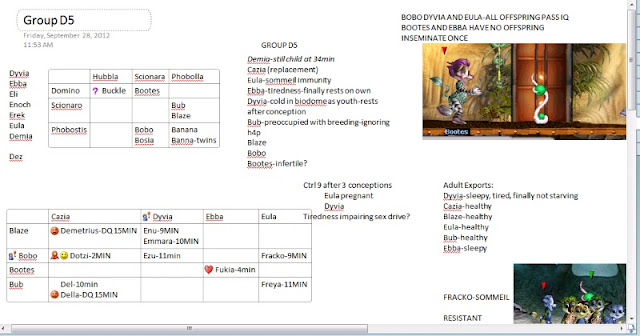 The charting feature is amazing. Here we have the ancestors of a little guy named Enu: 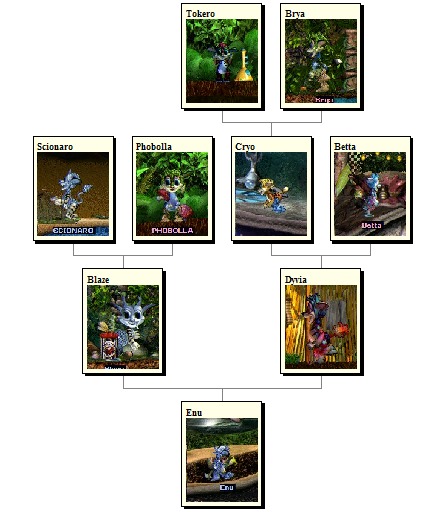 And here we can see all of the descendants of Enu's mother, Dyvia: 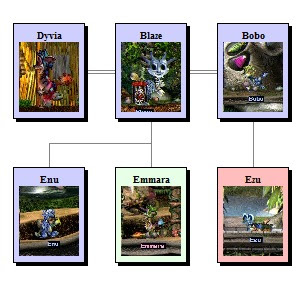 Going back even further, here are the descendants of Dyvia's grandmother, Brya: 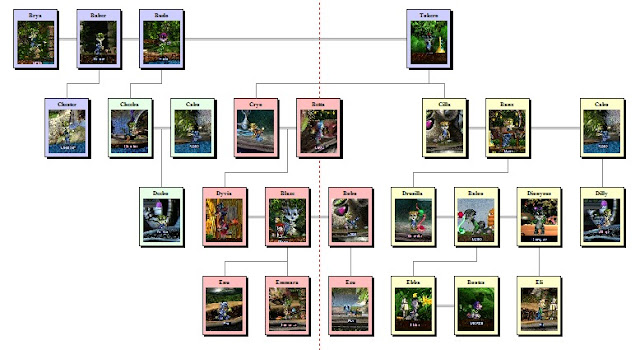 There are several different types of charts, all with their own unique appeal. I highly suggest all Creatures genealogy buffs check out this program. I'd love to see some of your family trees!

Intelligence testing is a standard part of most of my worlds.  Inspired by the Creatures IQ test developed by Danikat, I have devised a similar test using the Biodome metaroom.

The test begins at the very bottom right of the Biodome. 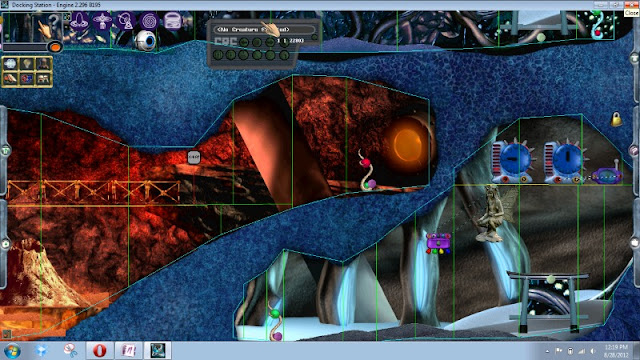 All eggs are collected via the Advanced Egg Collector, which along with the Vocabulizer are connection to a timer.The grids and colored dots show room boundary and CA links and are just two of the incredible functions of Amaikokonut's  Magic Words Room Edits, one of the most invaluable agents I have ever used.

After hatching, Norns must navigate doors and lifts (Elevines) in order to reach food, fruit and seeds.
There are two possible routes: Norns may either travel through the door (Torii) to the right, or use the Elevine to the left. 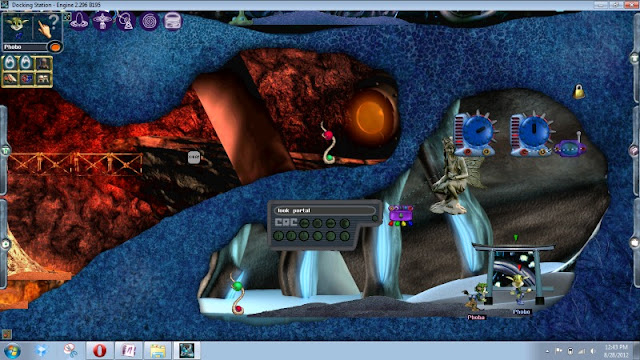 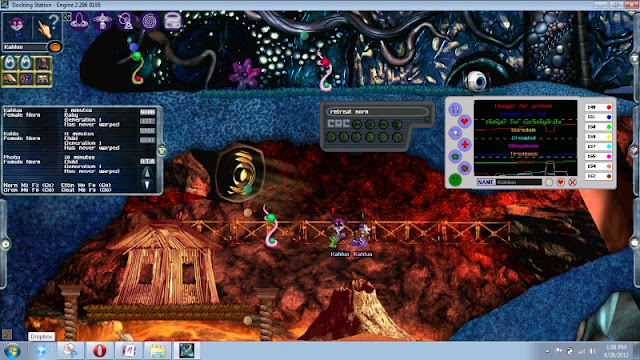 Regardless of which method is used to travel up to the second subterranean level,  a Norn  must be able to resist elevator, door, machinery/toy fixation in order to progress to the next level and avoid starvation. 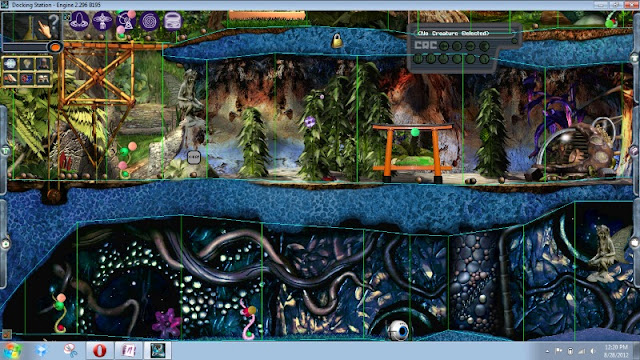 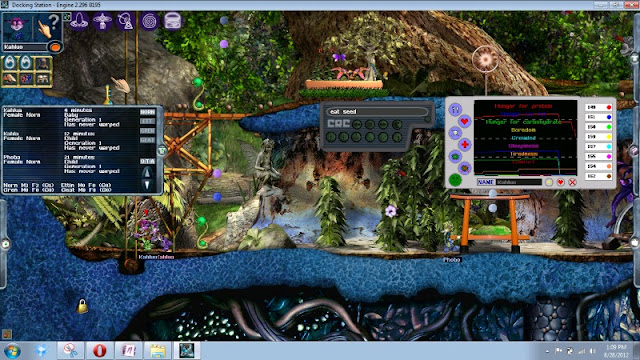 I'm pretty strict. If a Norn does not pass within a few minutes after reaching childhood, they are disqualified and usually exported. Most of the genomes I use in my world are edited so that survival and navigation instincts and drives kick in as a baby, rather than as children. Survival of the fittest starts at birth, after all...

I've tried creating intelligence tests using other metarooms as well, but the Biodome seems to be the most useful aside from the original Workshop test. Has anyone else made their own version of an IQ test? I;d love to hear about it! I'm always looking for new ideas and scenarios!
Posted by Jagotka at 1:21 PM No comments:

I decided to turn the Grendel Jungle into a cozier, Norn friendly environment. Unfortunately, the world ended up crashing before I got a chance to import any Norns, but it looks cool nonetheless. 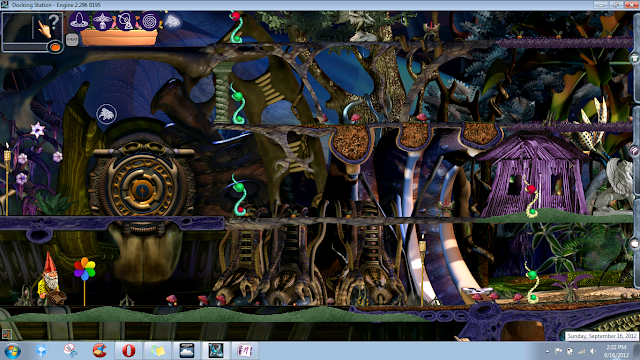 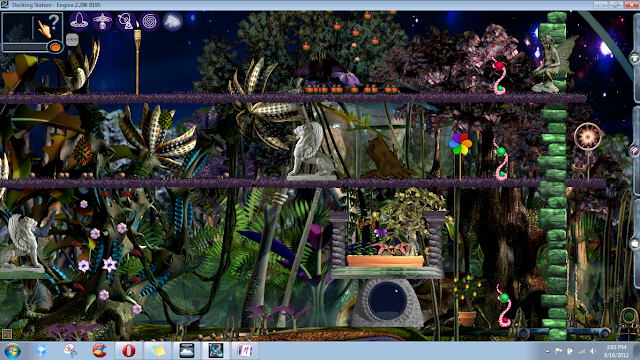 I wonder what today's project is going to be...

This is where it all comes together: